Could it be? Have ah truly returned to this here ol’ blog thingy-ma-jiggy? I reckon’ I have, babe!

It’s officially been over four years since I last shared some words with the world on this here site. Four years, y’all. If it was a child, it would be able to tell you that it wanted to have Chic-Fil-A for lunch and let everyone on the line know that you were wearing a wig. That’s how long it’s been.

END_OF_DOCUMENT_TOKEN_TO_BE_REPLACED

It’s been over two weeks since I last spoke to you all, and boy do I have a lot to tell.

First off, I want to apologize for being so distant. Your girl was actually in the middle of making moves — one of which, I can finally talk to you about. END_OF_DOCUMENT_TOKEN_TO_BE_REPLACED

It’s Fri-yay, but your girl has got a bit of a sinus issue that is zapping ALL of the energy out of her, so today is more of a regular, ol’ Friday.

I won’t keep you back from your usual Friday routine tonight as the night is screaming for people to head out and enjoy the cool, summer evening. END_OF_DOCUMENT_TOKEN_TO_BE_REPLACED

I promised to have a post for you on Friday, and by George you’re going to get one.

Unfortunately, I fell asleep before I got a chance to watch The Hunchback of Notre Dame for my “Disney Headscratcher” segment. I also didn’t get a chance to watch and/or dissect a new trailers for upcoming movies for NGC, so you’re stuck with my first ever “Day in the Life” blog post. YAY! END_OF_DOCUMENT_TOKEN_TO_BE_REPLACED

I know I promised you guys a season 1 end review for the new pilots I’d wanted to check out in my previous posts, but considering that one show has one more week to go before its Season 1 finale, I figured I’d wait until then to give my full, honest review. Also, there was a show that I did want to watch, but didn’t (Extant) and I need the weekend to catch up.

So, what do I have in store for you today, then? Well, I figured I’d update you on my life… but with a slant. Instead of just writing about my day-to-day experiences, I thought I’d highlight some of my biggest achievements for the week — which were mainly on Twitter.

OK, so my first accomplishment was getting none other than Mara Brock Akil, a.k.a creator of Girlfriends, The Game, and Being Mary Jane to laugh at my tweet (which she re-tweeted to her followers) during Tuesday night’s episode of Being Mary Jane (Season 2, Episode 6: “Pulling The Trigger”).

But that’s not all. After cracking Twitter up with my The Cosby Show crossover tweets for Empire (you know damn well Lee Daniels and the creators named Raven-Symoné’s character “Olivia” for a reason), I did a bit of live-tweeting for Scandal and then this happened…

Cyrus “The Devil Incarnate” Beene re-tweeted me. And when I tweeted about him re-tweeting my stuff, and he freaking favorited it.

After that, Tom Verica aka the director/co-producer of Scandal as well as bad (dead) guy Sam Keating from How to Get Away With Murder favorited a tweet I sent in his direction. 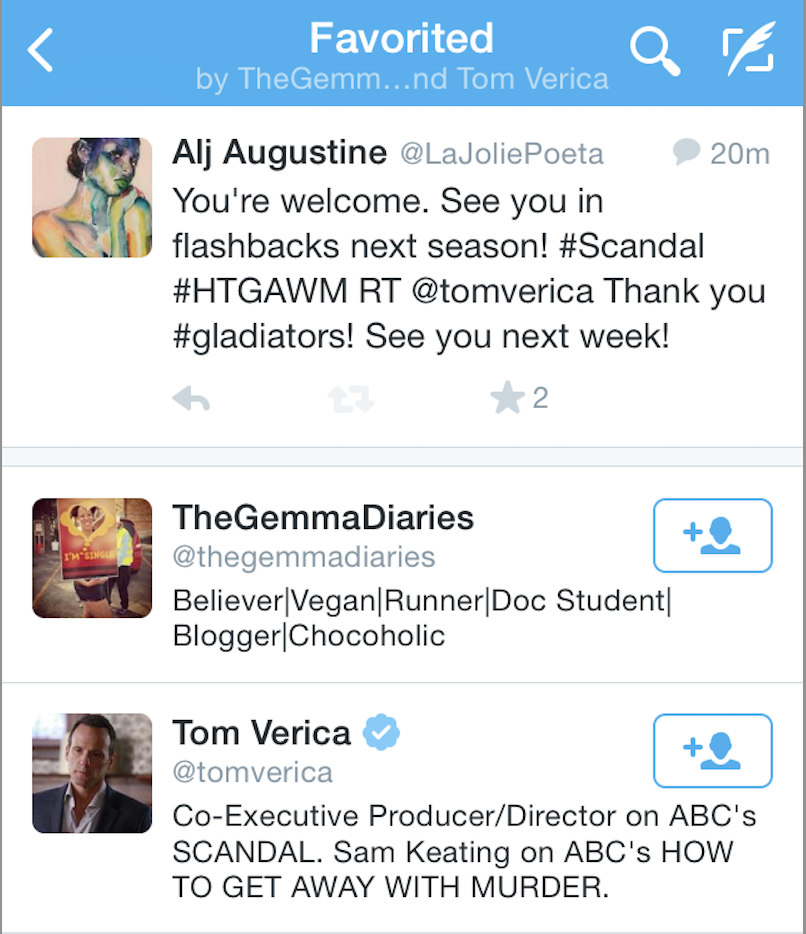 Now, why do I celebrate these small victories? Well, for a plethora of reasons, actually. The basic reason being that, I love Twitter, live-tweeting, and making people laugh. The other reason being that I love to connect with people (though I need to do a better job of it here on ATW) and when I see that the ones whose shows I watch aren’t too haughty to speak with the common folk such as myself, it puts a little smile on my face. Also, I like to imagine that other people in their circles get to see my tweets too and it’ll encourage them all to say “hey this girl is funny, let’s follow her.” A stretch? Yes, but dammit, let me live in my fantasy world!

I’m wearing them down, baby! via Tumblr

That’s all that I’ve got for now, but expect me to do another one of these posts once Grimm returns on Friday, March 20. I’m still determined to get the cast to re-tweet, tweet at me, or favorite one of my tweets… especially since Grimm‘s official Twitter used my hashtag a couple months ago to promote an episode… #WesenLessons.

Until then, be good my darlings!
-Alja