It’s the second day into the New Year and I’m quite excited to see what 2015 has in store for me and my blog. And while I’m slowly lining up the next steps I’ll need to take in order to get closer to my goals (whatever they may be at the moment) and further myself in this world, I have to say that 2014 was filled with quite a few golden nuggets:

1. I started writing on this blog again, which was pretty excellent. I may not have been consistent (bad Alja, bad!), but I did manage to organize some of my thoughts (with the help of blogger/writer/author extraordinaire Britni Danielle) and get them out here.

2. I started my Legend of Korra post-caps, which actually garnered views (and fan — you know who you are) and gave me a bit of a purpose to write! It was great to have something to weekly review, and my blow-by-blow recaps of the show on Black Girl Nerds prompted several people to tune in and become fans. *Pats self on the back*

3. I did a ton of tweeting this year — more than any other year I’d been on Twitter, and it got quite a bit of attention. From like Grimm live-tweeting, I finally got Bree Turner (Rosalee) to favorite a tweet, which she responded to! I also got a ton of favorites from Michael Golamco, one of Grimm‘s writers and a couple favorites from the only actor on the show who tends to keep me on her radar, Bitsie Tulloch (Juliette), and her on-screen nemesis, Claire Coffee (Adalind). Oh, and after learning that Garcelle Beauvais was joining the show, I sent my love her way, and she responded. 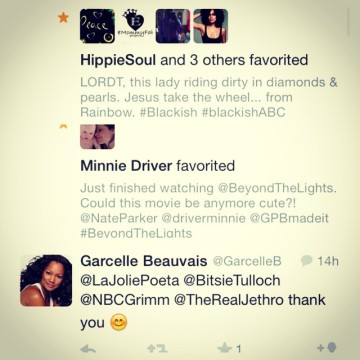 I also got a favorite or two from my woman crush Tracee Ellis Ross while live-tweeting Black’ish and I got a favorite from Minnie Driver after tweeting about her movie, Beyond the Lights, with my other woman crush, Gugu Mbatha-Raw, and Nate Parker.

4. One great thing I did this year (which I previously mentioned) was that I started contributing content to Black Girl Nerds. I still contribute my ramblings on just about any and everything from TV shows to being a weird girl in this cruel world, so don’t be a stranger and check it out.

5. This year was the year that I was also heard. I was invited to three podcasts — two with Cinema In Noir and one with The Nerd Element. With CIN, I was tasked with joining in to discuss the final season of True Blood and the Season 1 finale of Penny Dreadful and I was later brought on to co-host the show to talk about young Hollywood stars, Idris’s new movie and a couple other things. I was totally honored by the opportunity and was even more honored when The Nerd Element asked to hear my thoughts on The Legend of Korra‘s series finale and franchise. All episodes are available for your listening pleasure.

6. I attended my first Black Girl Nerds meet up during NY Super Week and got to see the creator herself, Jamie Broadnax. I also got to meet up with a few blerds, who I learned were just as bit as awesome in person as they are online. Good freaking times.

7. I took part in National Novel Writing Month aka NaNoWriMo 2014 and kind of did my best to finish a novel in a month. Now I say “kind of” because a) the novel was really supposed to be a novella that just got overly long and b) there was no way I was going to finish that story in a month since it’s venturing on becoming a 70,000-word piece of fiction — 20K more than the 50,000 word minimum to complete the challenge. By mid-November I was still stuck in the first quarter of the book, so I knew I wasn’t going to be able to wrap it up in just two weeks. However, by the end of November, I was able to add roughly 10K words to my saga. I’m still in the first third of the novel, but I wrote. Here, here to that!

8. The last thing that happened in 2014 is kind of bittersweet really, because I didn’t even get to enjoy it. You see, Showtime reached out to me, asking if they could use my tweet for a Penny Dreadful event that was going down. I said “hell yeah” not even knowing what they wanted it for, but turns out they were putting tweets on TV! My tweet, along with several others were featured on-screen during this past New Year’s Eve Penny Dreadful #FeelingDreadful marathon. The sucky part? I wasn’t home to see my tweet hit the screen, however, I saw tweets from other people who I live-tweet the show with (using the Black Girl Nerds coined hashtag #DemDreads no less), so I’m pretty certain it hit the screen.

Oh, and let’s not forget my professional highlights this year including interviewing dozens of celebrities from several reality shows and made-for-TV movies –> go to Wetpaint Entertainment to check those out.

So what’s on the horizon for 2015? A little of this, a little of that, and a mix of a stuff. I’m definitely going to do my best to keep this blog alive, and see if I can branch out here and there. I’d like to complete my goal of getting a favorite, re-tweet, tweet, or all three from the entire cast of Grimm. Saw far, David Giuntoli (Nick), Russell Hornsby (Hank), and Sasha Roiz (Renard) are my holdouts, along with Jacqueline Toboni (Trubel).

Overall, I’d like to get the opportunity to actually meet and/or speak with a ton of the people who influence my TV/movie watching and music listening, but we shall see. Those things take time. But then again, I have a year.

Thanks for checking in and making all of this possible!