Judging by the title of my entry, you can guess that this post is about *drum roll please* Korea (South Korea to be exact)!

I know, you’re probably looking at me like “Wait, you’re a black girl from the West Indies, living in Brooklyn, New York. What can you possibly know about Korea?” But guess what? I know I like their music and even a couple of their movies!

Thanks to modern-day inventions like the internet (and friends with things for cute Asian guys), I’ve been exposed to the wonderful world of K-Pop.

*Disclaimer* I do not presume to be an authority on K-Pop. In fact, I’m still a novice picking and choosing specific songs that catch my ear. With that being said, I will continue on.

A couple years ago, a young woman I’m pretty acquainted with named Elba (who is like a makeup extraordinaire) probably put me on to my first K-Pop song. It was Seung-Ri’s “VVIP.” The reason why I was interested in it? Because I saw a gif of him gyrating his hips on Tumblr and I was intrigued.

Anyway, after watching that video, I became even more interested in the Korean music scene. Now, one thing you must know about me is that I “fan girl” over things very quickly and pretty intensely. Once I have feelings about something, that’s it. I have those feelings until they die off, which sometimes happens almost as quickly as they begin (see: Alexander Skarsgard). Another thing you should know: I’m pretty open-minded. While most people would scoff at the notion of listening to music in a language they have NO KNOWLEDGE of, I instead took on the challenge.

Music is universal to me. You can ultimately know what a person is singing just by the tone, and the overall sound. Somber = sad, lamenting,  upbeat = happy, hopeful. It’s not freaking rocket science. Furthermore if Asians can sing along to Beyoncé and Jay Z without feeling any way about it, why can’t I jam to their music?! Another cool thing about K-Pop? Some of the songs feature English words. I guess that would mean they’re singing in KorEnglish, but I digress.

After putting me on to “VVIP,” Elba told me to try another song called “Strong, Baby” (which I fuggin’ LOVED) and then a bunch of tunes by Big Bang, which is the group Seung-Ri or “VI” sings in. She ALSO alerted me to the fact that actor Bi Rain from Ninja Assassin

is also a Korean pop singer:

Naturally, I was all like “what?!” That makes no sense. Then I watched a couple of his performances…

“THAT BOY KNOWS HOW TO ROLL HIS HIPS!!!”

And he actually has a song about it.

So in learning ALL of this, I started my own self-paced study into the world of K-Pop. Now, I can bore with the TEDIOUS way in which some of these kids are basically taken from their homes to endure dance and vocal training for years because they can even release a single, but I won’t (but you can read about some of it in this Village Voice article). Instead, I’ll just show you a couple of the songs I’m all about right now.

I’m probably going to try and do this frequently, since I find a new song I like ever so often. So, first on today’s list:

Why? Because VI is just getting his sexy on. The suit, the hair, EVERYTHING just works. If I lived in Seoul, I’d throw my panties at him if I saw him on the street. Yes, I went there.

I just love the beat, the guitar at the beginning, the way he just smolders with those eyes…

and makes suggestive movements with his hips…

Yum. VI is proving that he’s all grown up and ready to do sexy bedroom things with the ladies. Plus, the music is dance friendly and the hard remix (at the end of the video) is definitely something I’d jam to at the club.

Why? Because I’m really loving Hyolyn (Hyorin?)’s voice. You probably don’t know who I’m talking about, so here’s what she looks like in the video: 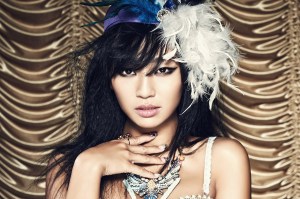 She’s basically the main vocals in the chorus and this girl can saaaaaaang. You’re probably not hearing how great she is because you’re completely distracted by the fact that they’re all singing in Korean, but she’s definitely got a voice on her. Don’t believe me? Listen to her sing Beyoncé’s “Halo.” I’ll wait.

Also the song’s just sexy. You kinda just want to give them, whatever “it” is after their sultry begging.

Hyolyn’s actually got this single out now called “One Way Love” that is growing on me. I’ll probably mention in my next K-Pop post…

Why? One, because CL (the lead singer of K-Pop band 2NE1) is an all-around bad ass. This chick has so much swag in this video, I can’t stand it. Her style is amaze balls (which is why she’s fashion designer Jeremy Scott’s muse) and she’s rocking gold fronts with fanged canines like nobody’s business.

Two, I’m IN LOVE with the choreography. As simple as it looks, it’s clean, funky, and makes you want to dance. I dare anyone of you to pick it up, and do it justice.

And besides that, CL’s rapping is cool, I like the flow, and the chorus is easy enough that I can sing along.

All in all, CL is just #werqing it for me. Get it girl!

These are probably the three songs that have been getting the most play on my MP3 player this week, but not the only songs I’m on to. I’ve got a couple other tracks from G-Dragon, Big Bang, 2NE1, Jay Park etc. that I listen to. I’ll let you know which ones are in rotation in my next installment.

As I mentioned before, I’m am NO authority on K-Pop, so I don’t know what’s the latest in music game until it’s too late. So if you’d like to school me on some songs I should be on, feel free to hit a girl up and tell her what’s good!

One comment on “Korea’s Got Alot of Seoul… And I’m Diggin’ It! [Music Videos]”